Hello again! I know it’s been a while, but I came out of retirement this weekend and put my burger eatin’ pants on to check out the 6th annual Philadelphia Burger Brawl. I last attended the event back in 2013, but was glad to see it has gotten bigger (moving down to Xfinity Live!) and better since then – this year adding both the “Taco Takedown” and a cocktail competition.

Out of the 29 burger competitors, I think I tried all but 5 due to a combination of the heat, some of the burgers not being ready yet during the VIP hour & simply being way too full. Here are some of my favorites (You can also check out more pictures from the event on our Facebook page): 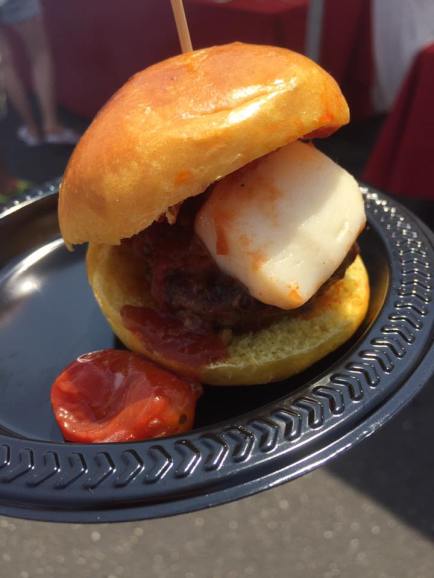 So who were the winners? In the Judge’s Choice category… Pineville Tavern with their Million Dollar Bacon Burger! 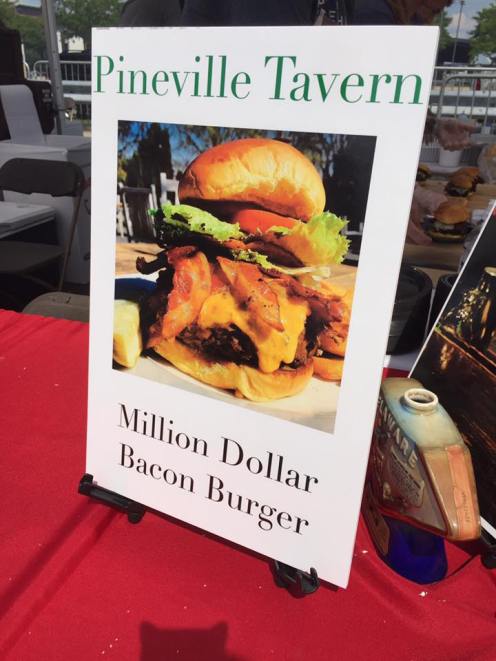 My only issues were the heat (which can’t be helped, obviously. It’s June) & that many burgers were past my preferred temperature of medium, due to health dept restrictions. Also: I was too full of burgers to try any of the tacos! Otherwise, everything about this event was fantastic. I love that they moved it to a bigger venue to give people more space to move around and spread out (and loosen up those waistbands). The former venue was a school parking lot that was very small & cramped & there wasn’t any seating. VIP Burger Brawl attendees got access to a covered outdoor bar at Xfinity Live & other attendees also had access to several patio areas with ample seating & tables to sit, relax & play some games like giant Jenga & cornhole. I’m definitely looking forward to attending again next year!

I’m also looking forward to posting more burger deliciousness for you! It may not be as regular (ie: weekly) as before since I’ve pretty much eaten almost every burger in Philly, but what’s summer without some good burgers? I’m planning to do a few burger “field trips” to showcase stuff outside the Philly area, as well as a special post about the burgers I ate on my recent trip to Japan, so stay tuned!

Don’t Pass On This Pub

I’ve been to Khyber Pass Pub countless times. They’ve got an amazing craft beer selection, a Nawlins-style weekend brunch, mac & cheese that I have dreams about, and the most delicious Po’ Boys this side of the Mason-Dixon line (including an awesome Vegan “fried chicken” one!). But the one thing I hadn’t tried before was their burger – until now! The Khyber Burger consists of an Angus beef patty topped with bacon, barbeque onions, smoked cheddar & creole mustard. They also let you choose from any of their Southern-style sides. I went with onion rings since 1) a lot of places don’t usually have onion rings as an option & 2) onion rings are the best!

I apologize for the poor lighting on the photo, but it was a little dark where I was sitting & a giant Happy Hour group was blocking my outside light. The onion rings had a nice, flaky batter on them so I added a few to the top of my burger before diving in. In addition to the barbequed onions already on the burger, the onion rings added some extra sweetness and texture (this is the go-to move!). The bun was a big, shiny brioche, much like the kind used at their sister restaurant, Royal Tavern. The bacon was crispy and the Creole mustard gave the burger a nice little tang. The patty was given a perfect bar char, but unfortunately was overcooked to medium-well/almost well done. The first few bites were juicy, but it was clear the meat was holding in too much heat; I found myself needing more ketchup to cover up the dried-out taste as I continued on. The burger to bun ratio was excellent, and I never once feared it would fall apart or that I would run out of meat before bun (or vice versa).

I was a little disappointed since everything else I’ve ever eaten here has been outstanding. Maybe because they have so many other great Southern sandwiches their burger just isn’t a main focus? Or maybe it’s my own fault that I didn’t just order a Fried Mac & Cheese Po’ Boy instead! Either way, Khyber Pass Pub is worth checking out – even if you don’t try the burger.

Every good burger deserves a sequel, but sometimes even not-so-great burgers get sequels, too. As a follow up to last year’s post, The Fast and the Curious, this week I visited fast-casual burger chain BurgerFi, who recently opened a location in Philly near the Pennsylvania Convention Center. BurgerFi is kind of like if Shake Shack & Five Guys had a baby: They use peanut oil on their fresh cut fries, they serve their burgers on potato rolls, they give you a buzzer while they prepare your order, and they’ve got plentiful taps pouring craft beer. They also tout themselves as serving “all natural burgers” using Angus beef and “brand” the outside of the burger bun with a charred BURGERFI stamp. I opted for the BurgerFi cheeserburger: A double natural Angus burger topped with double American cheese, lettuce, tomato, and BurgerFi® sauce.

The burger itself contains two thin double stacked patties like Five Guys and they’re on a toasted potato roll like Shake Shack. Unlike Shake Shack, the patties had a little bit of a grill-top char to them and unlike Five Guys, these burgers weren’t very juicy.  I didn’t think the Angus beef had any flavor to it, unlike the distinct profile of the La Frieda meat used at Shake Shack and the “secret sauce” was also bland and barely existent. As you can see, my burger did not carry the signature BURGERFI stamp (perhaps this is something they don’t have time for during the lunch rush?) and the cheese was barely melted. The fresh cut fries were thick and crispy – they also didn’t give you two pounds of them like Five Guys does, which can be either good or bad depending on which you prefer.

Verdict? For a burger, fries and a drink, the price point was slightly high for a fast-casual chain, coming in around just over $13 while I’ve easily only spent $10-$12 for the same items at Shake Shack & Five Guys. Between the cost and the lackluster food, I doubt I would choose this place over one of its better, tastier counterparts.

Happy 2014! It’s a new year and we are back in the burger eatin’ saddle. I’m really looking forward to this year because I’ve got a couple of big milestones coming up. Next week, A Side of Ketchup will hit its 100th post! I am promising to make it a super special, action packed (?), burgerlicious treat, so check back for that. Also, I am turning the big 3-0 this month as well! To celebrate, I’ll be dining at the Zahav chef’s counter and will (hopefully) be able to recap all 10 amazing courses for you guys, provided I don’t slip into a food coma first. Additionally, I’m heading to Las Vegas at the end of the month for some extra celebrating and will be recapping the best burgers & other delicious delights Sin City has to offer.

So we’ve already had our first big snow storm of 2014 and what better way to have spent my snow day then lunching at Butcher & Singer. Their elusive “lunch only” burger (Monday-Friday) is probably one of the best deals in town at a mere $10.95! (That’s steakhouse quality at Five Guys prices) The burger is a whopping 10 oz Filet Mignon patty on a brioche bun, topped with English cheddar and caramelized onions. You’ve also got a little iceberg lettuce, tomato, pickles and “secret sauce” on there as well, and they give you a ton of fries. (I couldn’t even finish them all!)

The burger came out cooked perfectly medium, as I would expect from a place that makes meat temperature their main business. I loved everything about this burger. The meat was juicy and bloody, with an amazing char on the outside. The bun was thick and soft, withstanding all the drippings (although I did have to take my time eating it to ensure that I wouldn’t run out of bottom bun first). It’s a good thing that the hostess seated me in a corner where no one else had to look at me because I was destroying this bad boy! I was kind of embarrassed about the way my napkin looked afterwards, but hey, that’s what you get for serving something this amazing at a fancy, white tablecloth place, right?

Look how massive this thing is!

It was an all around excellent burger (Stephen Starr is not messing around, folks!) and definitely the right way to kick off a new year of burger eating, especially at the price point. I highly suggest – nay, I demand! – taking a long lunch break to get the Butcher Burger. Both your stomach & your wallet will thank you!

That's what this girl's made of...

- relishing life one burger at a time -

Home Speakeasy
In Search of Beer

Finding all the best beer events in Philadelphia.