Last one out of Flavortown

This week we celebrated July 4th, which means we are smack dab in the middle of summer. And what are two things that are synonymous with summer? Burgers and outdoor concerts. A few years ago, I showcased burgers at some local venues here in Philly. And while BB&T Pavillion (AKA Susquehanna Bank Center AKA Tweeter Center, depending on how old you are) may seem like it’s part of the Philly music scene, it is technically in Camden. More than just the name has changed in the past few years – the food and beverage offerings have changed as well; a sure reflection on the thriving food & beer scene in Philly and South Jersey. There are now a myriad of craft beer stands (such as local NJ breweries River Horse & Flying Fish) and stationery food trucks set up throughout both outdoor areas, as well as inside the arena itself. There’s even a stand where you can get Chickie & Pete’s Crab Fries – everyone’s favorite ballpark staple.

And then, as I was heading to my seats. I saw this:

“Is this real life?!”, I thought to myself. I mean, there is only one FlavorTown, headed by one fiery haired celebrity chef, right?? Sure enough, I rounded the corner and found the stand for Guy’s Burger Joint, with Guy’s smiling face and questionable facial hair staring right back at me. 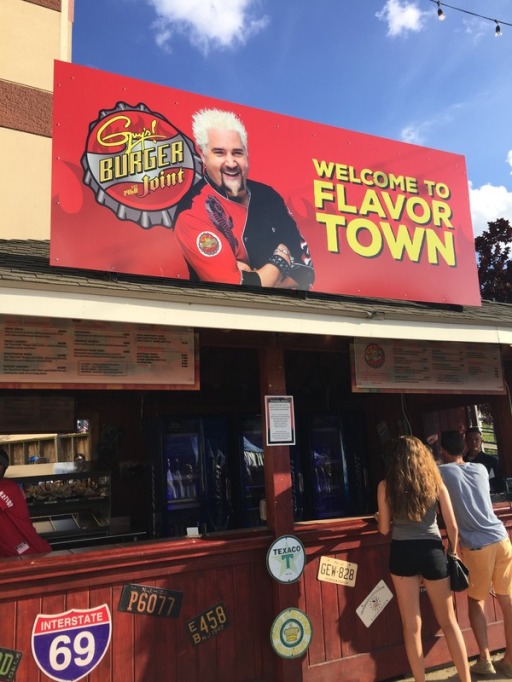 I evaluated the burger options – all fairly basic and in the $13-$16 range (which is about as much as you would expect overpriced venue food to cost). Well, it’s now or never, I thought to myself. I have to do this, right? I mean, it’s my duty as a burger blogger to eat this burger topped with whatever “Donkey Sauce” is so that other people don’t have to. So I saddled up to the counter, ordered a “Real Cheesy” – which is an 80/20 ground chuck blend patty topped with L.T.O.P (lettuce, tomato, onion & pickle; not to be confused with Kanye’s TLOP) S.M.C (super melty cheese) and a liberal slathering of the aforementioned Donkey Sauce (what I learned was a “jacked up” secret mayo sauce) on a buttered & toasted roll.

Being that this was a QSR at a very large music venue, my burger was not cooked to order & was presented to me from a warmer mere seconds after ordering. The presentation of the burger itself wasn’t entirely terrible, save for the 2 inches of shredded lettuce topping it and hiding the sad burger patty. I did have to double check that they actually put a tomato on there (you can just make out its very pale red sliver). Once I got both my hands on it, the burger was much thicker than I had anticipated. Sure it was probably a frozen patty, but honestly, it tasted much better than some of the frozen patties I’ve ever had. The “Donkey Sauce” was bland and flavorless, there was entirely way too much lettuce & the only saving grace was the butter-griddled bun. The pickles were reminiscent of a cheeseburger at McDonald’s and all I could think was, “Oh my god I just spent $14 on an overpriced McDonald’s cheeseburger”.

Compared to the sad looking slices of (probably $9) pizza I saw people carrying around, this is probably one of the best food options at the BB&T Pavilion (which really isn’t saying too much, I guess). So if you haven’t eaten before the show, or if you just get really drunk on $16 premium drafts and need to feed the beast, get yourself a ticket to Flavortown and check out Guy’s burgers.

That's what this girl's made of...

- relishing life one burger at a time -

Home Speakeasy
In Search of Beer

Finding all the best beer events in Philadelphia.